You cannot escape the responsibility of tomorrow by evading it today.

The Paris Agreement represents the first collective effort by all countries to address climate change.

It is an historic turning point in the global efforts to reduce greenhouse gas (GHG) emissions. For the first time, the United States, India, China and the European Union and its Member States were all at the table, influencing other nations to join the effort.

Even though imperfect, the Paris Agreement solidly positioned the community of nations to recognize that each could and would contribute in an evolving way to the reduction of emissions to slow the rate of global warming.

Keeping global warming to well below 2°C (3.6°F) above pre-industrial times, or even 1.5°C (2.7°F), can only be achieved by significantly and rapidly reducing emissions. About 70 percent of global anthropogenic GHG emissions are from carbon dioxide (CO2) from fossil fuel2. These CO2 emissions are primarily driving the observed changes in the climate. Deforestation and other GHGs also contribute to changing the climate3. 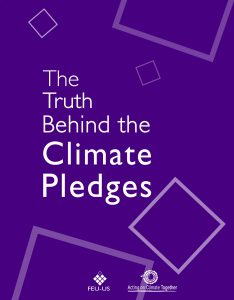 Global average temperature has already warmed by about 1°C (1.8°F), above pre-industrial levels, and could exceed the goal of the Paris Agreement of limiting the increase to 1.5°C (2.7°F) as early as 2030 if global warming continues to increase at the current rate4.

But global warming continues to accelerate –global CO2 emissions are still on the rise, reaching yet another peak in 2017, and are anticipated to continue to increase5.

To halt the trend in increasing global emissions, and thus in global temperature increase, 195 parties to the Climate Change Convention have signed the Paris Agreement in 2015, and 187 parties have ratified it6. As of October 1st 2019, 184 parties to the Climate Change Convention have submitted their climate pledges. After the ratification of the Paris Agreement, the climate pledges were re-submitted, changing their initial denomination from ‘Intended’ to Nationally Determined Contributions (NDC).

The climate pledges, even if fully implemented, will only cover less than half of the emission reductions needed to limit global temperature increase to 1.57.

This means that action to half emissions within the next decade need to at least double or triple and increase by five-fold to reach net zero emissions by 2050.The sooner decisive measures to reduce emissions are implemented, the most cost-effective these actions will be.

Without massive changes and active leadership in the very near future, we could be living in a 1.5°C world in about a decade.

When the Climate Change Convention was adopted, countries were categorized into industrialized and developing (or Annex I and Non-Annex I countries).

When the Paris Agreement was adopted in 2015, all countries made pledges to reduce emissions.

The emission reduction commitments stated in the 184 climate pledges are voluntary and not legally binding. These commitments depend on policies, technologies and practices to be adopted and implemented at the national level in each country. For some countries, the implementation of the pledges also depends on the provision of international financial or technical support, referred to as conditional pledges.

Of the 184 pledges, 127 (including India) or 69 percent are partially or totally conditional. This means that without international finance or technical support, these pledges may not be implemented.

These conditional pledges were mostly put forward by developing countries that lack the financial capability to reduce emissions as well as the technological and institutional capacity.

Based on the difference in the categorization of countries between the Convention and the IPCC, some high-income countries have put forward conditional pledges that depend on international funding for its implementation.

Reducing emissions by 50 percent by 2030 will require a significant transformation in the way all countries generate and use energy. Some countries will need international funding to implement the required actions to change their energy generation and use in the framework of sustainable growth.

The ratification of the Paris Agreement could have been an opportunity for countries to review and increase actions to reduce emissions. However, 97 percent of the 184 climate pledges are the same as those initially submitted in 2015-2016, after the Paris Agreement was adopted. Compared to the intended commitments submitted in 2015-16, only six countries have reviewed their pledges: 4 countries increased their plan to cut emissions; 2 countries weakened their commitments:

3. Other GHGs are methane and nitrous oxide ↩

6. Status of ratification of the Paris Agreement ↩