The first Intergovernmental Panel on Climate Change (IPCC) Assessment Report was published. This comprehensive scientific assessment of climate change alerted the world about its impacts and potential future risks.

One of the conclusions of this report was the need for a framework convention on climate change that commits countries to action on greenhouse gas (GHG) emissions and the adverse effects of climate change. The IPCC also concluded that the convention should contain provision for separate annexes/protocols to deal with specific obligations.

In addition, the United Nations Advisory Group on Greenhouse Gases concluded that an increase of 2ºC above pre-industrial times would be dangerous. A 2ºC increase would be ‘an upper limit beyond which the risks of grave damage to ecosystems are expected to increase rapidly’.

The United Nations Framework Convention on Climate Change was adopted by 195 countries in 1992, and entered into force in 1994.

Its goal is to “stabilize greenhouse gas concentrations at a level that would prevent dangerous anthropogenic (human induced) interference with the climate system” … “within a time-frame sufficient to allow ecosystems to adapt naturally to climate change, to ensure that food production is not threatened, and to enable economic development to proceed in a sustainable manner.”

The Convention divided countries into two groups: Industrialized and developing (or Annex 1 and non-Annex 1 countries). This is because in 1990, industrialized countries were responsible for about 50% of global GHG emissions.

Why focus on GHG concentrations?

Carbon dioxide (CO2) accounts for about 76% of global GHG emissions. CO2 emissions are absorbed by trees, plants and the oceans –or carbon sinks. But these natural processes cannot keep up with the increasing rate of emissions, absorbing only about half of global CO2 emissions.

Those emissions that cannot be absorbed by natural sinks accumulate or concentrate in the atmosphere, together with other GHGs.

It is these GHG concentrations that are causing global temperature to increase, which is driving the climate to change.

The Kyoto Protocol was adopted, committing 37 industrialized countries and the European community to reduce GHG emissions. It entered into force in 2005.

Implementation of the Kyoto Protocol first commitment period, with a GHG emission reduction target of at least 5% below 1990 levels.

The countries that committed to implementing a 5% emission reduction over the five-year period 2008 to 2012 are:

The European Community was among these industrialized nations.

Implementation of the Kyoto Protocol second commitment period, with a GHG emission reduction target of at least 18% below 1990 levels.

The countries that made commitments under the Kyoto Protocol second commitment period over the 8-year period from 2013 to 2020 changed.

Canada, Japan New Zealand and Russian Federation did not make commitments to reduce their GHG emissions.

Currently, the share of global GHG emissions has changed.

Upper and lower middle-income countries combined currently account for more than half of global GHG emissions.

Because middle-income countries are considered as developing countries for the UNFCCC, they were not required to reduce GHG emissions.

This is what triggered the discussions towards an agreement that required all countries to reduce GHG emissions. 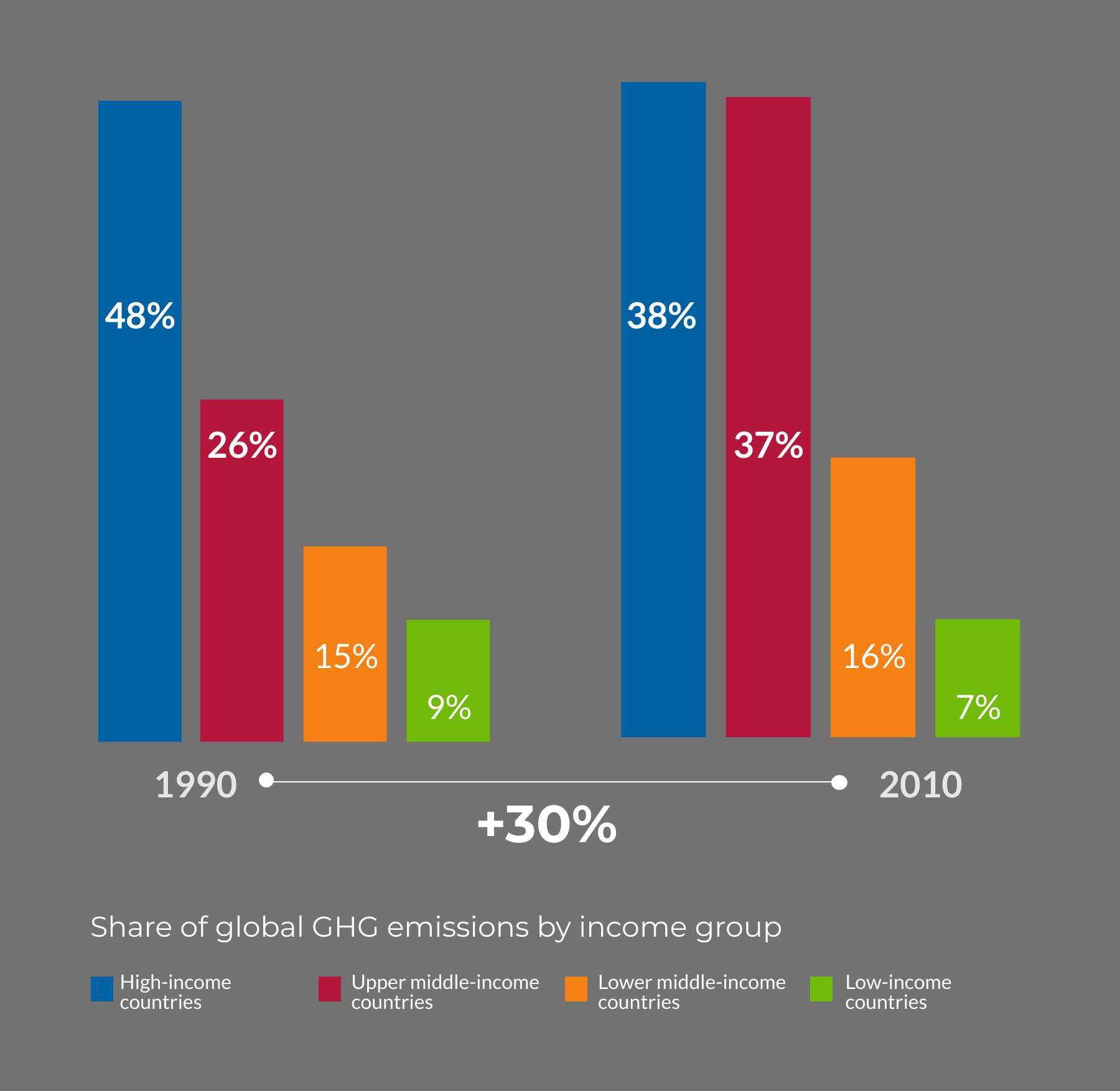 The Paris Agreement was adopted by 195 countries, committing all countries to reduce GHG emissions. These commitments are voluntary. It entered into force in 2016.

Implementation of the Paris Agreement voluntary climate pledges over the ten-year period 2020 to 2030.

Almost 70% of these climate pledges are partially or totally conditional to international finance, technology and capacity building for their implementation.

See the Ranking of the 184 Climate Pledges