As long as global emissions are not rapidly reduced, global warming will continue to accelerate. This means that we could be living in 1.5oC world as early as the 2030s54. As a result, weather events and patterns will continue to change, and will adversely affect human health, livelihoods, food, water, biodiversity and economic growth.

Weather events are the result of natural factors. A warming climate has altered the intensity and frequency of heat waves, droughts, wildfires, and severe storms (or heavy precipitation) and hurricanes –both of which lead to flooding55. Once-a-century severe weather events are now becoming the new norm.

These weather events influenced by human-induced climate change are becoming more frequent and intense. They are also becoming more costly.

Because global warming is accelerating, the number and economic losses from weather events are projected to at least double again by 2030. That comes to $660 billion dollars a year or almost $2 billion a day within the next decade.

The world cannot afford these costs on lives, livelihoods and economic growth. This massive price tag is part of the cost of inaction.

Today, fossil fuels provide 81 percent of the world’s primary energy57 and the CO2 released with their use is responsible for 70 percent of the observed warming58. The climate pledges are indeed a critical first step to reduce emissions; but will only address less than half of emission reductions needed59, if fully implemented.

There are two ways in which CO2 emissions can be rapidly reduced to double climate action.

To drastically reduce CO2 emissions in the next decade, a 70 percent reduction in coal use for electricity generation will be necessary as well as a five-fold increase in wind and solar energy61. Yet, about 60 percent of the world’s primary energy will still be dependent on fossil fuels (mainly natural gas and oil) to power, heat and fuel the world in 203062.

The implementation of the current pledges is far from the necessary reduction in coal use and promotion of renewable energy targets needed to limit human-induced climate change.

Worldwide, there are more than 2,400 coal-fired power stations63. Phasing out and closing these coal-fired power plants within the next decade is essential to reducing CO2 emissions. This option is viable, cost-effective and certainly doable. However, due to the misconception that breaking the dependency on coal may hinder economic growth, vested interests, short-sightedness, bad economics and even denial make this option unlikely to be implemented within the next decade. In fact, 250 additional coal-fired power stations are currently under construction64.

Using energy more efficiently is something each one of us can do. It can result in emission reductions as well as significant savings in energy bills (electricity, natural gas and fuel). Households worldwide could save more than $500 billion dollars by 2040 by adopting energy efficiency measures that are available today, for example, better insulation, choices of glass, ‘green’ roofs, heating, ventilation, and air conditioning (HVAC) choices. Each dollar spent to make vehicles, buildings, appliances and equipment more efficient pays back, on average, by a factor of three through lower energy bills66.

Solving climate change requires leadership. It also requires the collective effort of all of us.

Despite the climate pledges, the policies under implementation and those to be adopted, tax credits for renewable electricity, carbon pricing and other measures, national governments need to at least double or triple actions to reduce emissions in the next decade. The next round of new or updated climate pledges is expected to be submitted by 202067.

World leaders also have the opportunity to show their climate leadership by adopting and implementing additional policies to reduce emissions and to use energy more efficiently. Policy can accelerate the implementation of climate solutions.

Stronger leadership is needed to sustain the call for increased climate action, nationally and globally, to meet the Paris Agreement targets. Since the United States announced its intention to withdraw from the Paris Agreement in 2017, a number of other countries appear to be paying little or no attention to the urgent need to reduce emissions. A few world leaders remain strong advocates of the Paris Agreement, and they need to lead other nations to honor and increase their commitments.

Leadership from the private sector

The burden of addressing climate change cannot be left to governments alone. Business leaders can be climate leaders. Some have already shown their leadership –about 200 major companies committed to sourcing 100 percent renewable electricity by 205068. For these companies, climate action is a sustainable way of doing business and a driver of innovation, competitiveness, risk management and growth. This private sector leadership can also have an influential role –investments from businesses also have the potential to drive policy changes.

Individuals can be climate leaders too. Communities, both as citizens and consumers, can make a major difference through their coordinated actions. It will only require smarter choices.

We need a paradigm shift in our current culture. Individuals can: 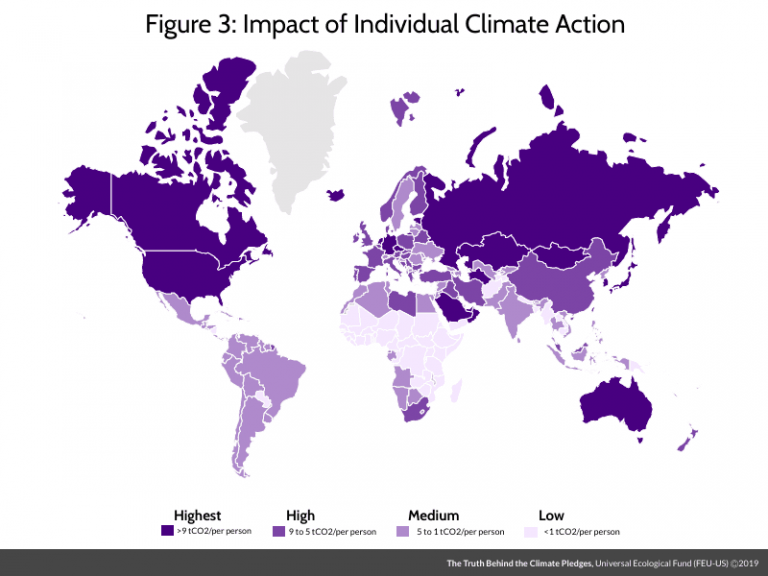 See the interactive map with the impact of individual climate action.

Individuals in some countries can have a higher impact in reducing emissions than others, based on their CO2 emissions per person69 (Figure 3).

Young people in many of these countries are leading a global mobilization demanding political action to address climate change. These young climate advocates can lead and mobilize individuals to take climate action as well.

Each one of us can be a climate leader.

We all contribute to climate change. We can all help solve it. •