The Truth About Climate Change

195
195 countries adopted the Paris Agreement on climate change. Except for a handful of countries, climate change has not been a priority for taking action for almost 20 years.
165
165 pledges, representing 192 countries, were made to combat and adapt to climate change, to be implemented from 2020 to 2030.
$100 Billion
83 percent of the pledges are in part or entirely conditional to the $100 billion per year in financial assistance for their full implementation.
33%
If all pledges are implemented, global GHG emissions will be 33 percent above the level of what they should be in 2030 to stay below 2ºC above pre-industrial levels.
1ºC
Global average temperature has already reached 1ºC above pre-industrial times in 2015.
1.5ºC
Because of the lack of action to stop the increase in global GHG emissions for the last 20 years, an additional warming of 0.4-0.5ºC is expected. The 1.5ºC target could be reached by the early 2030s.
2ºC
The 2ºC target could be reached by 2050, even if pledges are fully implemented.
Double
Weather-related events due to climate change have doubled in number since 1990. Reaching the 2ºC target means an additional doubling in the number of climate change impacts already experienced everywhere.
Net Zero
To stay below 2ºC, CO2 emissions should be net zero by 2060-2075.
65%
CO2 accounts for 65 percent of global GHG emissions as a result of the burning of fossil fuels.
82%
About 82 percent of the energy (electricity, fuel and natural gas) in the world is produced by burning fossil fuels –31 percent oil, 29 percent coal and 22 percent natural gas.
30%
Non-fossil fuel electricity generation is 30 percent –16 percent from hydropower, 5 percent from renewables and 11 percent from nuclear power.
“

We cannot solve our problems with the same level of thinking that created them. 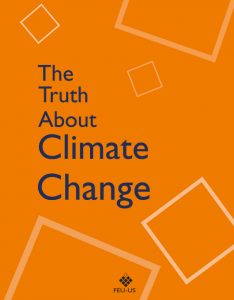 The adoption of the Paris Agreement represents a critical step towards global climate action. In December 2015, all countries agreed for the first time to collectively tackle climate change. Starting in 2020, actions will be implemented in 195 countries to combat and adapt to the changing climate.

•  Inaction to combat climate change poses higher risks and costs for people and development; yet some argue that the costs of reducing greenhouse gas (GHG) emissions would be prohibitive.

•  There is massive evidence that we are already suffering the negative effects of human-induced climate change; yet some argue that action to tackle climate change could be postponed since it would only happen in the long-term.

•  Responsibilities should be differentiated among countries since not all countries contributed equally to the problem.

In addition, the way climate change has been communicated to the public has also contributed to delayed action.

For more than 20 years, the Intergovernmental Panel on Climate Change (IPCC), the premier scientific body on climate change, has been analyzing the trends and sources of changes in the climate system, the impacts of changes in climate and the options to combat climate change. Climate science is complex. IPCC scientists use a combination of observations, assumptions and models of possible futures for their assessment. They also assign probabilities of when certain changes may happen, because changes in climate depend on policies and actions taken by countries, not just on science.

The IPCC detailed assessment is published in three voluminous reports. Policymakers primarily use the Synthesis Report and the three Summaries for Policymakers, which summarize the main conclusions of the comprehensive assessment of climate science, as a basis for decision-making.

The public has access to information on climate change through other sources than the IPCC and other scientific reports. Information from these other sources has often been confusing for the public. In addition, there has also been deliberate misinformation from deniers and sectors with vested interests in maintaining the current situation.

This miscommunication of climate change has created some misunderstandings in the public, which has led many to perceive climate change as abstract, distant and even controversial. As a result, what is actually happening with the climate and the immediate actions required to address climate change have been misunderstood.

The decisions taken at the Paris Climate Conference, if implemented, will affect and benefit all of us. Over the next few years, we will have to produce energy from low-carbon sources, use energy more efficiently, travel less and even change our diets. The climate will still continue to change and we will continue to experience unusual weather everywhere.

Public support will be crucial to accelerate climate action in all countries. Thus, the following questions aim at explaining some misunderstandings about climate change and the Paris Agreement.